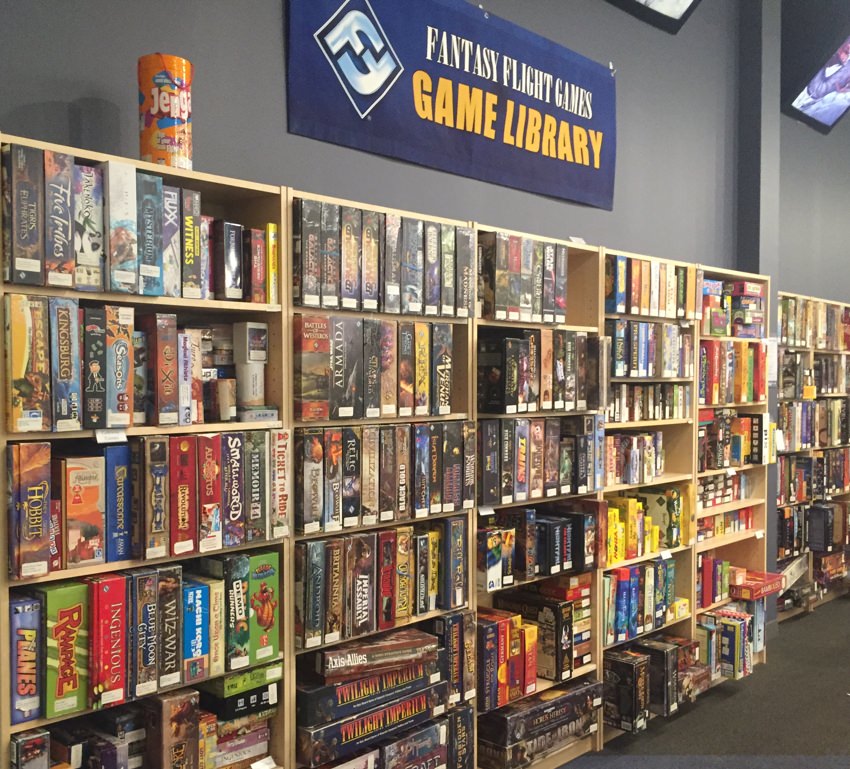 Let’s start by what I mean by the title “Culling the Nerd“. It sounds ominous, but I don’t mean actually culling nerds out of your life, I’m talking tips, tricks, strategies for decluttering your nerd life when your collections grow to a hoard, and you have things that you haven’t used for a long time. I’m going to be talking about board games a lot because that’s what I’m going through right now as I try and sort and cull.

This is a tough question, and for each person it’s going to be different. The common reason is that you’re running out of room. You have a collection of something, movies, board games, RPG books, manga, art supplies, etc that you have loved and collected for a long time, but now they are taking up too much room. You haven’t used them in a while or you have another nerdy hobby you’re more focused on now. That is a good time to clear out some things from that collection. It might also be that it’s just taking up space, you have the space to store it, but you never use it or look at it anymore. For that reason you might look to free up the space just so you have more space available. Or, maybe you have a collection that has some value, for example you collect Magic: The Gathering cards for a while but aren’t playing anymore, maybe you look to move them so that you can get some funds for your current collection. That’s a great reason to cull some of the nerd clutter out of your life.

How Do You Cull?

Another tough question, how can you be brutal enough to get rid of some things that have given you joy in the past? It’s tough, going through board games, I got rid of 16 different games and it’s tough to get rid of some of the games. For some of them, it was the fact that I haven’t gotten them to the table either at all or in a long time. I got rid of the game Power Grid, which is a fun game that I have good memories playing, but it hasn’t made it to the table in a long time, and looking forward, I don’t know that it ever will again. I have other games that I prefer to play now, and if I really want to play it again, I can probably find someone who has a copy or find it on a game shelf at a game shop. I will say, you have to be brutal at times when culling and sometimes you need to do a second pass. When you go through something you haven’t seen in a while, you open up a box or find something that you’ve forgotten about and the memories come flooding back. You remember the good times you had with something and all of a sudden, something you haven’t looked at in years seems to have value to you again. Ask yourself this when that happens, if you put it back into the box or onto the shelf, is it just going to sit there again for a year? If the answer is yes, you maybe should cull it. And if you can’t quite bring yourself to do it now, set it aside, and when you are done going through once, come back to the maybe pile and go through it again. Especially if this going through the maybe pile is a day or two later, you might find that you are now ready to let go of things since you have had your reminiscing and now you can now move on from it.

Where Can it Go?

This is something that can maybe help you get rid of more. Is there a spot that you can donate it to where people will enjoy it? Or a place where you can sell it and pass on what you’ve enjoyed to someone else. In my case with the board games, I’m going to see if one of the breweries that I like is interested in the games. They have a game shelf that I could help refill for them as games at breweries end up missing pieces or getting beer spilled on them. But maybe that isn’t your scene or you have comic books you want to donate. Is there a Children’s Hospital that you could give them to, or somewhere that can donate them to people who would want them. Or, you can sell yourself.

The piece of advice I have to give when selling them yourself is that the person the comic book or movie or board game is most valuable to is you. If a game cost you $100 and you’ve played it twice and enjoyed it but won’t play it anymore for whatever reason, $80 seems like a reasonable price plus shipping to someone who is out of town. It’s going to run them $100 after shipping (shipping board games is expensive). I’d love to say that you’ll be able to get that value, but you likely won’t and as much as it might hurt, you might need to sell your memory for less than it seems worth. Spend time on Amazon and eBay figuring out the actual cost of an item used and if you are just going to list it locally on Craigslist or Facebook group, go slightly cheaper, even if it seems too cheap to you. These are things you determined you don’t need anymore and getting something for them is better than nothing, especially if you’re selling something so you can get money for your next nerdy hobby. Finally, opposite of that, there can be things that have a certain value to you and anything less won’t do. It might be because they are rare and worth that much or it might be that anything less than a certain amount isn’t worth losing the memory. However, that is a special case, don’t do that all the time.

I’ve Tried to Cull, but I Just Can’t Do It

It is tough, sometimes when looking at something you haven’t touched in years, you still can’t get rid of it. I’m not an expert on hoarding or I’m not going to tell you that you’re a hoarder. If you are, hopefully you can find someone to help you with that. But if it’s just tough to get rid of your old action figures that are sitting in a box in the basement, recruit some help. Have someone go through it with you and ask you a second time if you really need it. Or someone who can listen to your story about the game one last time and help you be tougher about getting rid of things. This part I don’t have much advice about because it’s something that is tough and personal for a lot of people. I don’t want to belittle what you’ve gone through with your hobby and the memories you have with them. It might help to also remember that those memories are yours even if you don’t have the action figure or board game or movie anymore. While they might work as a trigger for the memory, the memory itself will always be yours no matter if you have the item or not. Finally, it might help to remember you don’t need to do all of this at once. If you have six boxes of comic books that you want to go through, go through one of them and start there. You don’t have to go through all of them at once, because that loss can seem like a lot, but doing a little at a time and moving forward on it that way can help a lot to slowly clear out the parts of the collection that don’t mean as much anymore.

Hopefully these are some helpful suggestions. It’s tough, and I’m a pragmatic person so for me, culling things is easier than a lot of people, and it’s still tough for me. That’s why, with the board games, I want to give them away somewhere that I know people will enjoy them. Instead of just giving them away randomly to a Savers, I want to put them somewhere that I know where they are going, but also with the hope that they’ll be able to get people into board gaming and be there for a lot of people.