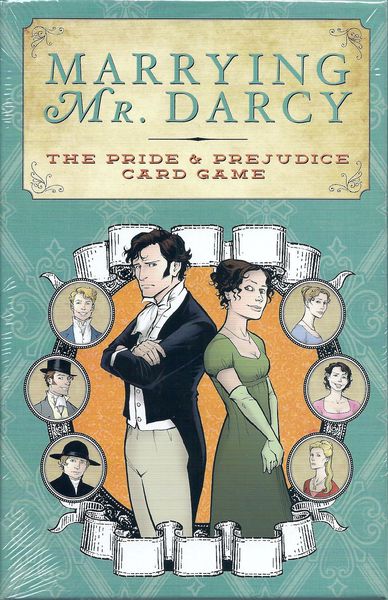 Join us for a fancy party at the Netherfield Estate and try and find the most eligible most eligible bachelor and get married in the end. Marrying Mr. Darcy is a quick card game set in the world that Jane Austen created, and it can handle a large group, which means that it can hit the table for a board game night.

In Marrying Mr. Darcy, you are trying to collect the correct set-up of wit, beauty, reputation and dowry to attract the best possible suitor. But beyond that, you are playing one of the Bennett sisters or one of the other characters, such as, Georgiana Darcy. Each of them has an preferred person to marry, but to do that, they need to get a right combination of those cards. On your turn, you draw a card and you do what it says, it might allow you to play down an attribute card, or maybe it’ll be party where it can help you draw more cards, or lose cards, and parties are done by the whole group. It’s a very simple game with mainly just a bunch of luck in it. The one thing to consider is that some cards can be used for cunning, which doesn’t help you get married, but means that you can attract your suitors earlier in the final phase of the game. So, if you are going to score the most points, as Elizabeth by marrying Mr Darcy, you might want to get ahead of someone else who might score some points by marrying him because maybe their attributes don’t match their ideal suitor.

The game play is very simple in this, turns consist of drawing a card and doing what it says. That simplicity helps it work for a more casual group, but it doesn’t offer too much in terms of tactical play, because you, when select a character, are locked into which suitor is going to be your ideal. So you’re really at the luck of the draw to see if you can get the right reputation, dowry, wit, and beauty to attract them. The pile of cards you’re drawing from is quite big as well, so while turns are very fast, the game can go on for a little while. Depending on how the game night is going or what plans there are for further games in the game night, you can play with less cards, and playing two players they tell you to play with about half the cards, because otherwise characters would have too many attributes, but with a full player count, you need all the cards.

Then in the final phase of the game, the proposal phase, you match your attributes, see whom you can court, and then going in a specific order, determined by the game, you choose to either roll or not roll a die for the suitor. This offers some push your luck, because the suitors further down the line are going to probably be more suitable for you and for scoring more points. But, if you fail, you can become an old maid, which hampers how many points you can get. This part of the game goes fast, which is good, because the first part can overstay it’s welcome.

What makes the game work is when you can get into the goofiness of the game. Jane Austen was very sarcastic and witty, and while the game doesn’t always perfectly emulate that on all the cards, it is that on a lot of them. So if you have a group that can enjoy the silliness of the game and lean into that, it helps make the game much more enjoyable. Otherwise, the game is going to be too simple and too long. And even as someone who can lean into the silliness of the game, the game does almost run too long for me. Turns are fast, but there are so many cards that it just takes a while, and eventually even the variety of cards tends to start to seem similar, because a party is still a party even if the flavor of the party is slightly different than the flavor text of the previous party. That’s why I mentioned taking out cards, because it’ll speed up the game with fewer cards in it, the issue with that is that for a full player count and the suitors who need more beauty, wit, dowry, and reputation to be married, you won’t be able to reach those numbers, or you’ll need to be lucky to reach those numbers. And I think for a lot of people because of the simplicity of the game and length of the game, it isn’t going to be an ideal game for them. It takes a group who likes the premise to really make it work.

I haven’t done this before, but I’m going to talk about the expansions. There are two possible expansions that you can add into the game, the first is the Emma expansion. This one just causes it to shift books over to Emma. It adds in a few more event cards so that the game is more thematic for Emma, but the biggest thing is that the characters change. There’s also an undead expansion, because of Pride, Prejudice and Zombies, so of course there needs to be one. This can cause one of the women or suitors to become undead which makes your odds of getting married or marrying them much lower. I think that this expansion adds some needed variety to the game, not because I love zombie games, but because it leans more into the silliness and helps pull people into the absurdity of the world of Pride and Prejudice.

Overall, this is a game that I’d recommend to people who love Jane Austen. Beyond that, though, the game is pretty simple and the game can overstay it’s welcome, so I’d recommend this as a pass. That said, I think that this could be a gateway sort of game for a non-board gamer who likes Jane Austen or at least like the movie, especially if you can help lead the silliness of the game for them. I wish that the game offered a few more meaningful decisions though.